We talk to the builder of the LEGO Christmas Tree!
Staff Writer

We were lucky enough to chat with Chris Steininger, a LEGO master builder who designed the festive LEGO Christmas tree with other master builders (including his dad)! You can see the tree for yourself in Melbourne’s Federation Square this year. Check out the LEGO secrets he spilled…

KZ: What’s it like working with your dad on LEGO projects?

Chris: It’s a lot of fun! One of the cool things about where we work in Enfield, Connecticut (North American headquarters for LEGO), is that the seven master builders work right there. We share an office, which can be scary at times! But we do work well together; we just let each other go for it and make it happen.


KZ: Sounds like a lot of fun! Can you tell us about the Melbourne tree!

Chris: One of the coolest things about this Christmas tree is we wanted to make it look very large and impactful. And it’s topped off with this new star we’ve got which is really impressive – it’s got almost 3,500 LED lights in it! It’s bright at night and does some really cool things.


KZ: How many people did it take to build the tree?


KZ: It’s so rad! We love it. So, what’s the coolest thing you’ve ever built?

Chris: I’ll give you my top three:

KZ: Can you spill on the LEGO design process? What’s something we’d be surprised to know?

Chris: We don’t design just by hand, we design it on the computer! Eventually we can take it layer by layer and put it together.

KZ: And finally, a super important question! Is there anything more painful than stepping on LEGO barefoot?

Chris: I don’t think there really is! It’s like the thing that sneaks up on you in the middle of the night when you go to the bathroom and get a drink of water. It’s always there looming… 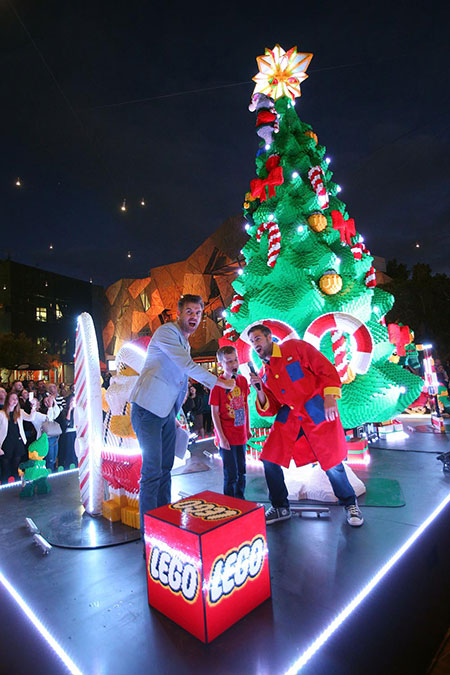 Which skill do you want to master?

Which item is the most fun?

Which is more satisfying to pop?