I came here coz i miss kzone A LOT - Adrian Shout out Memphis and Logan - Zac M K-zone is the best magazine to ever exist! - Ryan L dr strange movie yay!!!!!! - harry K-Zone stops me from being bored all the time!!! - Aris K Kzone is AWESOME!!!!!!!!! - Luca Hi everyone, I love the jokes and memes - Jack G K-zone rock like the rock - Henry M Hey my name is Adam nice app - Adam n nice max - caleb Y

Check your answers for the May 2022 issue activities!
Aideen Weingarth 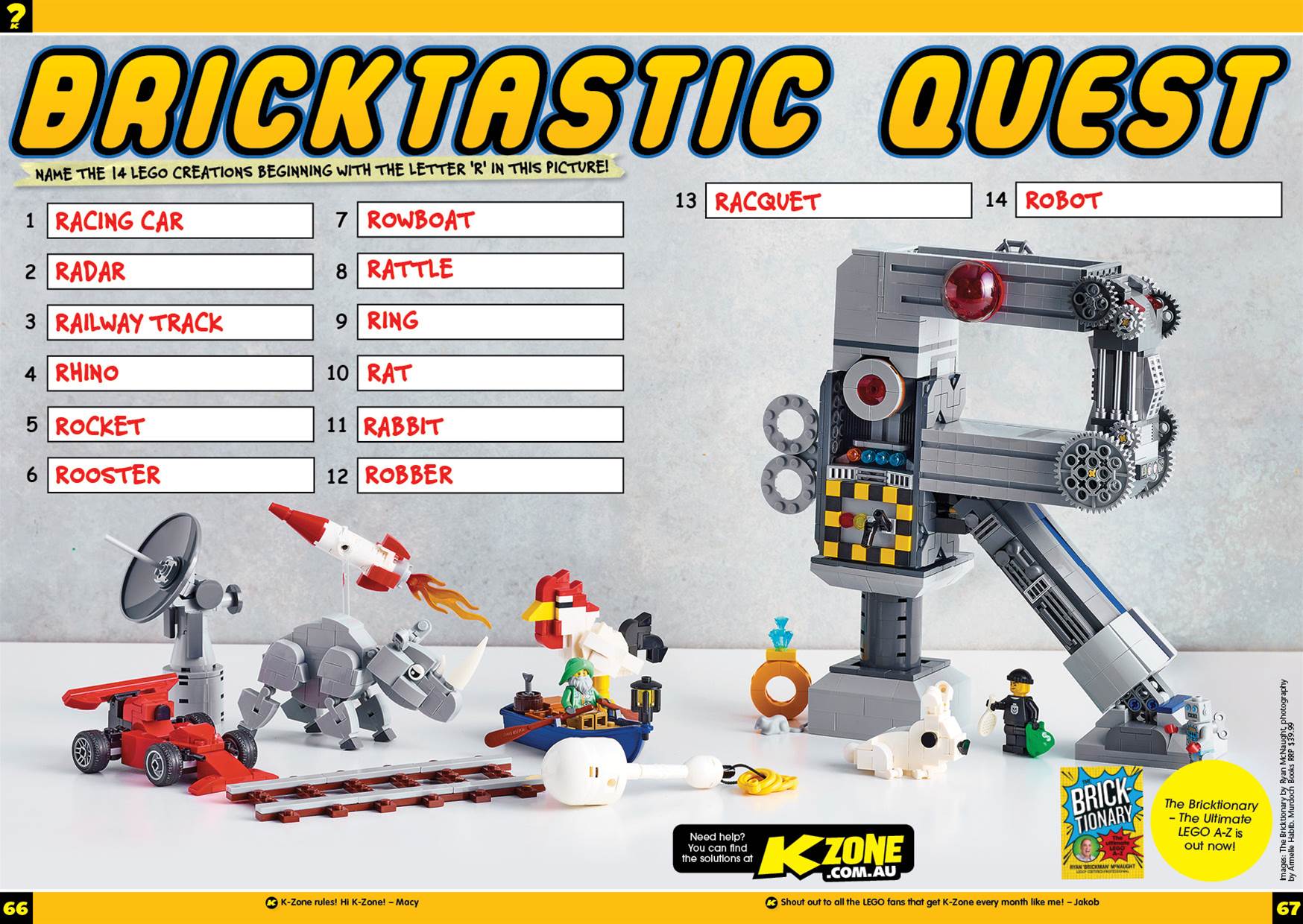 We can tell you’re a huge sports fan and that’s awesome, K-Zoner! You also think that teamwork makes the dream work, so it’s super obvious that you’d be all about soccer on Sports Day. Round up an epic team to captain and it’ll be the best day ever.

You’re always up for a challenge and love to push yourself to achieve your goals. Oh, and you’re pretty strong too! Athletics is perfect for you, and there are plenty of events within in it to choose from – sprints, javelin, high jump, hurdles… Go show ‘em what you’ve got!

They wouldn’t be able to get you away from the volleyball court on Sports Day! This event includes two of the things you rate the most – having way too much fun with your friends, and using your stealthy ninja skills to be here, there and everywhere. 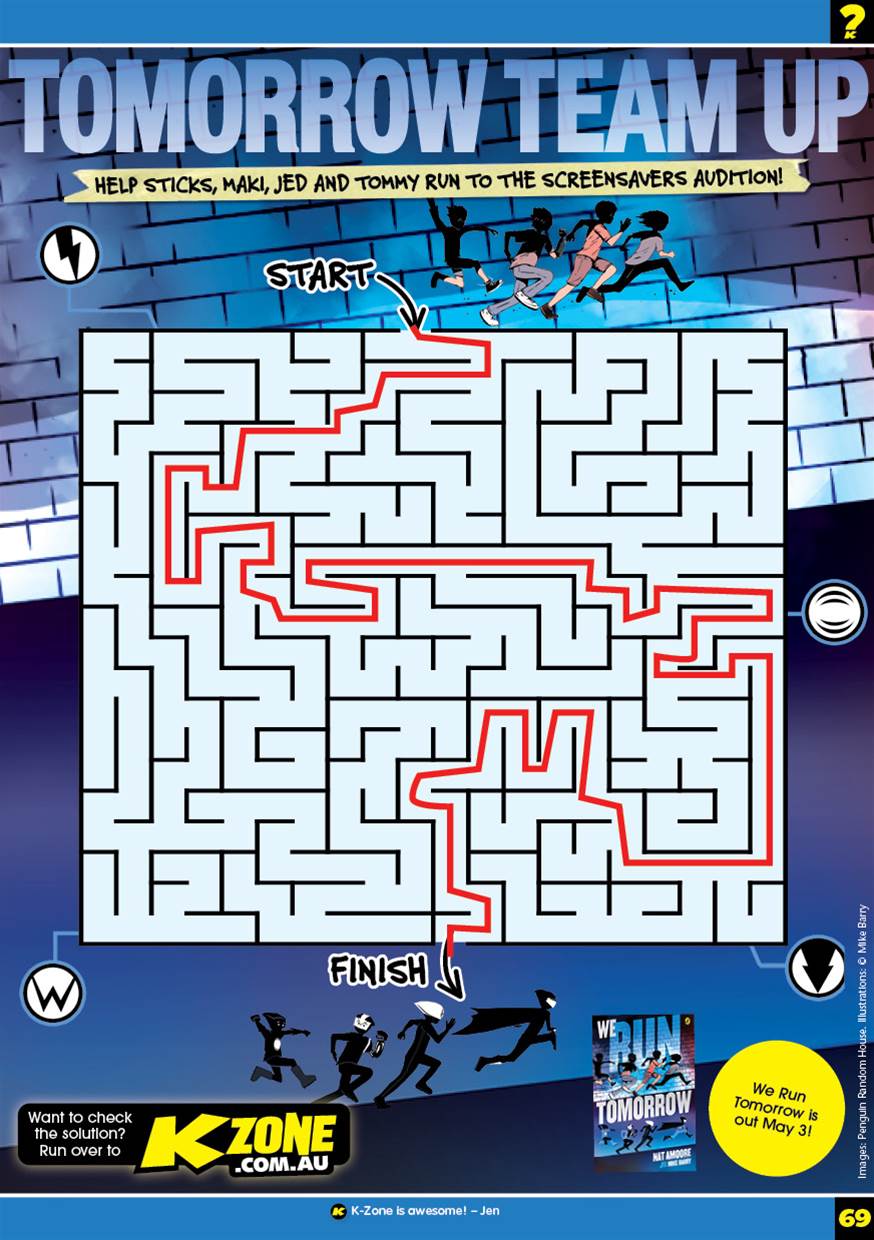 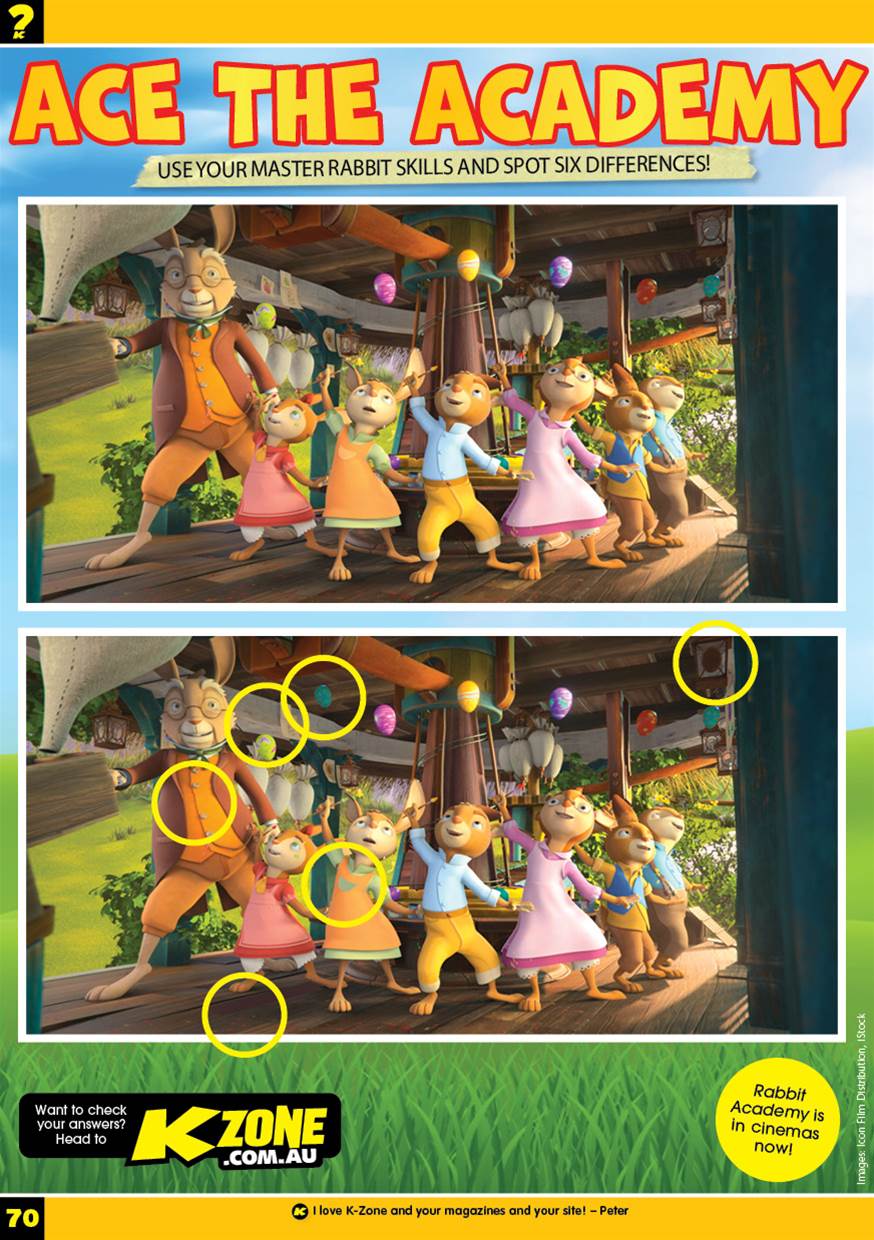 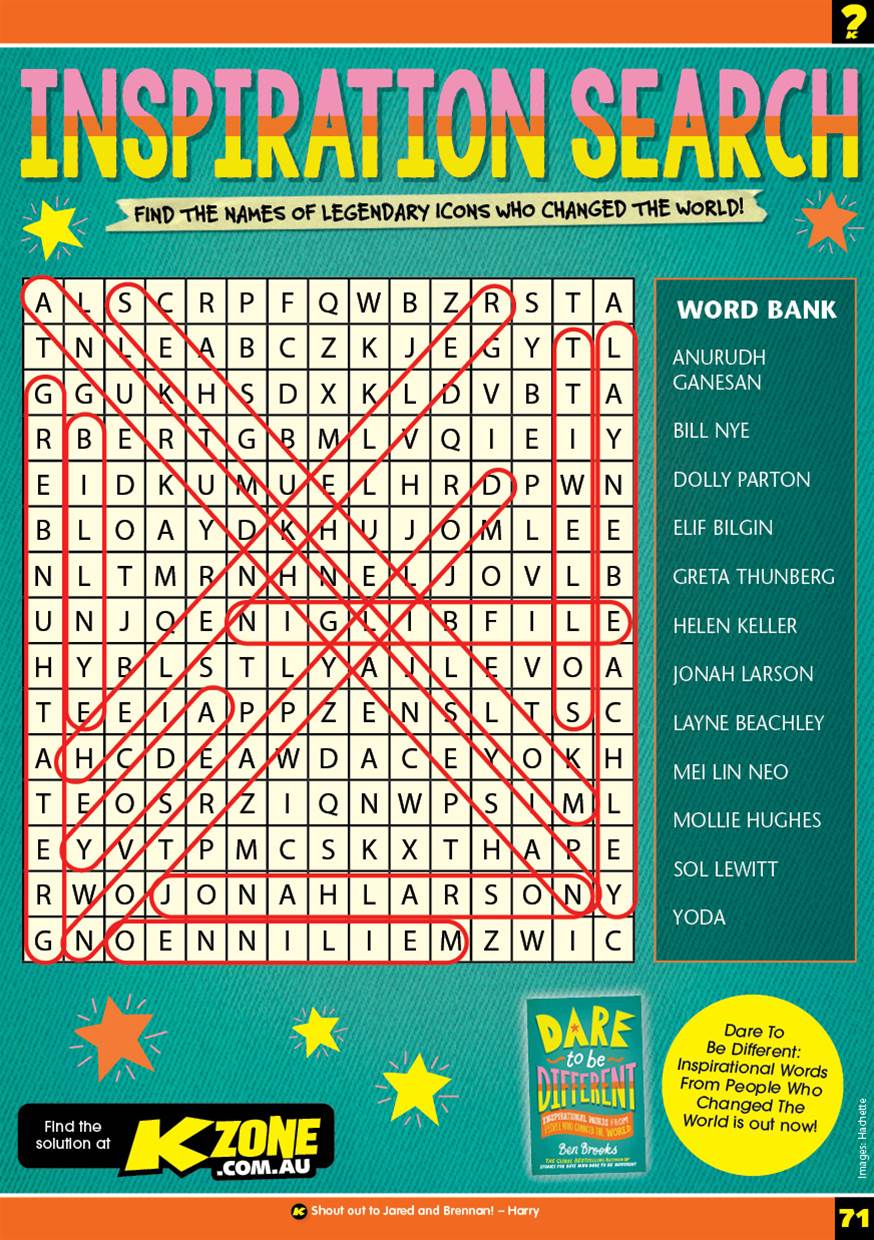 You’re a fun, chaotic rebel who totally reminds us of Sonic! Your sense of humour helps get you out of tricky situations, but sometimes it lands you in them too. You have endless energy and won’t stop until you get your way, even if it causes maximum mayhem as you go.

Just like Ahsoka Tano, you’re a classic rebel who always backs themselves. You have stacks of cool skills that you’re always keen to show off, and you might even have Force abilities! You’re also absolutely fearless and will do whatever it takes to protect the people you care about.

Ohh! You’re a rebel with a secret weapon… Super smarts! Leaving things to chance is for rookies – having a solid, well thought out plan is the key to your rebel success. You strive to make everything fair and will break the rules to stand up to injustice. Hermione Granger would be proud!

If you’re not scheming or causing spontaneous mischief, you’re probably sleeping. And when you’re sleeping, you’re most likely dreaming about your next big prank or the time your meddling was extremely next level. You might want to take it down a notch or you could be mistaken for Loki!

1b) A major group of antibiotics! Alexander Fleming had invented penicillin, which kills a wide range of bacteria and is one of the most widely used antibiotics today. This discovery changed the world of modern medicine, and pencilling has saved (and is still saving) millions of people around the world! Fun fact – Fleming called it ‘mould juice’ for many months before naming it ‘penicillin’. It certainly sounds cooler now!

2b) The slinky! Richard James was developing industrial equipment stabilisers using sensitive springs, but knocked a new spring over and watched it do the (now famous) Slinky walk down instead of just hitting the ground. He took it home to show his wife, Betty, who said it would be a great toy! After choosing the word ‘slinky’ from the dictionary (a Swedish term meaning ‘sleek and sinuous’), the toy was demonstrated during the 1945 Christmas season and became loved by children.

3a) Sticky notes! Spencer Silver struck gold (sorry) when he wanted to develop a super strong adhesive but invented the opposite – an adhesive that stuck to objects but could also be easily removed. Silver told everyone at his company, 3M, how great this new, not-so-great glue could be, but no one listened until four years later. A colleague called Art Fry could see a use where no one else did – holding a page in a book. Fry’s bookmark’s kept falling out, but with Silver’s weak glue on a paper bookmark, the first version of the Post-it Note was made. 3M finally produced Post-it Notes 10 years after Silver first created the formula. Now we all have the perfect piece of stationery for covering rooms and large items in great pranks!

4c) The first synthetic dye, and the colour mauve! William Perkin was 18 years old when his attempts at an artificial version of the malaria medicine, ‘quinine’, led to brown sludge. Mixed with alcohol, the combination turned silk a bright shade of purple, which didn’t wash out and was more vibrant than any existing dye. Until Perkin’s invention, dyes were mostly made using insects, molluscs or plants. Perkin’s invention of mauve colouring was a hit in Paris and London fashion at the time, and Queen Victoria famously wore a mauve dress to her daughter’s wedding in 1858. Perkin’s work with dyes actually inspired a German bacteriologist called Paul Ehrlich, who used the inventions to advance immunology and the first chemotherapy. Who would have thought that failed brown sludge, and the first purple dye would one day help to fight cancer!

5b) Potato chips! This popular story has become a bit of an urban legend, so it’s difficult to know if this was the first time potato chips were made, but here’s what we know is true: George ‘Speck’ Crum was an excellent cook in an American restaurant, who was well known for serving thinly sliced fried potatoes, known as ‘Saratoga chips’. Here’s where the story gets a bit fuzzy. Legend says that one day, Crum was fed up with a customer’s complaints about thickly cut French-style potatoes he was served (which was popular at the time). The food was returned three times – thick cut potatoes were not this customer’s favourite apparently! Since the thickness was the issue, Crum decided to slice the potatoes as thin as he possibly could, fry the potato slices (which wasn’t considered a fancy thing for a restaurant to do at the time), and cover them in a huge amount of salt. Crum was trying to create the worst potatoes ever eaten, but to his surprise (and probably irritation), the customer loved it and ordered more! While the story may have had some extra flavour added to it over the years, it seems that Crum was one of the first people serving delicious potato chips, and helped to make them so popular!

6a) Microwave ovens! Break out the microwave popcorn for this story – the US company Raytheon was working on magnetron tubes used in wartime radar defense, and the ‘microwaves’ emitted by a magnetron melted a chocolate bar in Percy Spencer’s pocket. Spencer developed a box for cooking and found that when food was put in the box with the microwave energy, it cooked very quickly. The first microwave oven was tested in a New England restaurant, and the first home microwave oven was introduced in 1967! 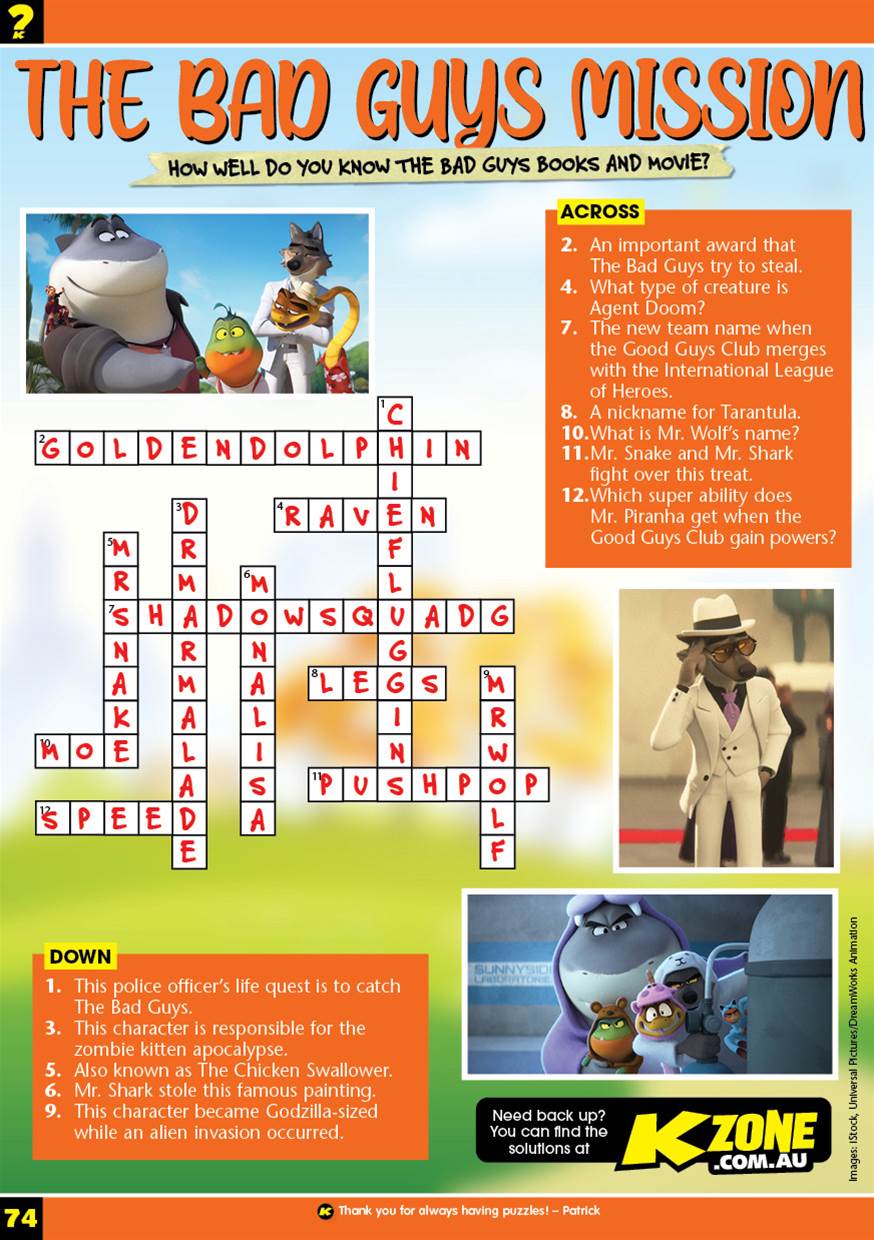