Thanks for the codes - Fallen I wish covid 19 never happened (It is so boring at home isn't it guys) - Liam d F Hi K-zone you guys are awesome - Jack H Hi everyone kzone is the best - Daniel K-zone for life - Julian A Hello - Emerson K-zone and Spiderman are the best! - Lucas O HI - hi REMEMBER YOUR NEVER ALONE. SO HAVE A GREAT DAY!!!! - katie Shout out to Finch Hatton state school - Charlie H 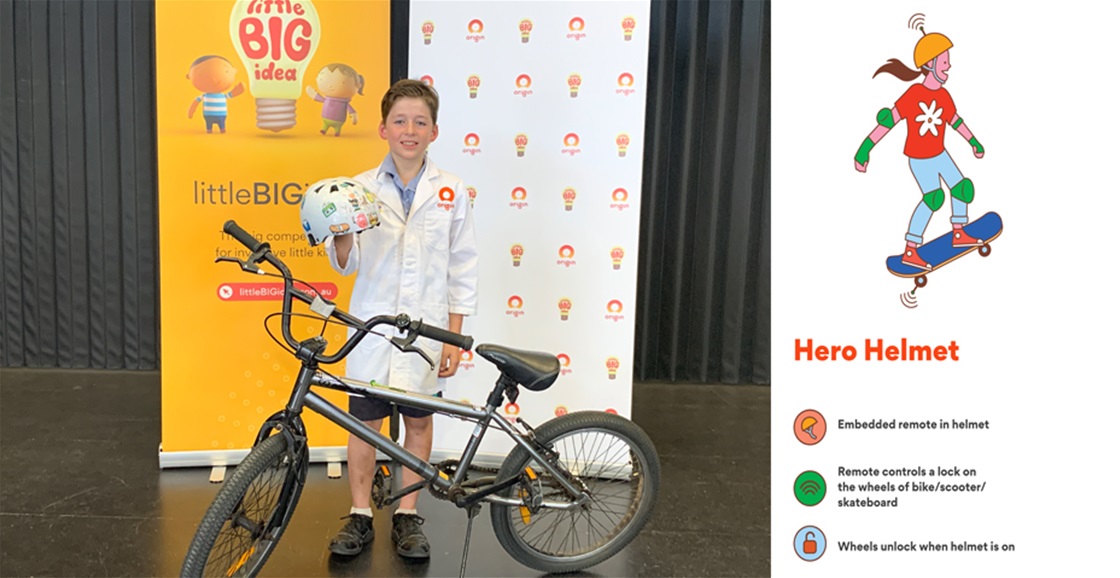 Hey K-Zoners! Have you created anything cool in a game, with LEGO or using any other materials recently? Let me know in the comments below, I would love to hear about your awesome inventions! I recently asked littleBIGidea winner, Samuel, about his winning design. Samuel was one of three winners in the 2019 Origin's littleBIGidea competition, and his Hero Helmet design was chosen from over 1000 entries! As a winner, he also receives a trip to the NASA Kennedy Space Centre in the USA!
Aideen Weingarth

S: Thank you. I’m really excited to be the national prize winner of Origin’s littleBIGidea competition in my category! I didn’t expect it at all and was really shocked when it was announced, at an assembly in front of my grade.

KZ: How would you explain the Hero Helmet to K-Zoners?

KZ: What inspired you to create the Hero Helmet?

S: I invented the Hero Helmet because I am passionate about bike riding, scootering and skateboarding, and want to encourage other kids to wear their helmet to protect them from head injuries. I decided that something needed to be done to protect kids from head and brain injuries, and that’s where I got the idea for the Hero Helmet.

KZ: How long did the prototype take to design, and how did you make it?

S: My grandad and I started working on the prototype as soon as I entered the competition. We spent a number of weekends on the project and used a number different materials to try and develop a working prototype.

KZ: How did you feel when you found out you were one of the three winners chosen from over 1000 entries?

S: I couldn’t believe I had won and was in shock! At the same time I was really proud and excited to be given the opportunity to visit NASA.

KZ: Do you have any plans to keep inventing, or future plans for the Hero Helmet?

S: I would love to see every kid wearing a Hero Helmet one day. I’ve already created my first working prototype on a scooter, so I’d really like to keep working on my idea to see what other applications my invention could have with bikes, skateboards and other devices. Part of my idea was to develop an app that could alert parents when their kids are wearing their helmets. Technology really excites me, and I’ve never developed an app before, so I think I’d like to explore this idea a bit further.

Want to read more of our interview with Samuel, or want more news about awesome inventions? Grab the April 2020 issue of K-Zone, on sale now!

Read more from this blog: The K-Zone Blog
Tags:   heroes