shout out to people who like K-ZONE and Roblox!!!!!!!!!!!!ඞඞඞඞ - Max S Big shout out to 2J! - Zaheer im luving kzone more each month - dylan b I LOVE SOCCER AND KZONE - Augie I looooove ur books and have been reading them for ever and I never won a prize but I feel like I will today - Logan g Shout out to ya boy Rice , James and Leon - Patrick Go kzone I love entering the prize party - Ava D I came here coz i miss kzone A LOT - Adrian Shout out Memphis and Logan - Zac M K Zone rocks the best mag ever! Joel - Joel C

Meet An Exotic Fauna Keeper From Taronga: Who's Who In The Zoo?

Tim Bennett is an Exotic Fauna Keeper at Taronga Zoo Sydney, and appears in Taronga: Who's Who In The Zoo, Saturdays at 7:00pm on Nine! For more of our interview with Tim, grab the April 2020 issue of K-Zone, on sale now!
Aideen Weingarth

KZ: Hi Tim! What other experience did you have before becoming an Exotic Fauna Keeper?

T: I’ve actually started volunteering at the zoo when I was 15. Since then I’ve had a number of roles in the zoo including staying overnight and conducting tours, helping work in our wildlife hospital and looking after all kinds of amazing animals.

KZ: Did you have any hobbies as a child that have helped your career?

T: I was generally an inquisitive kid. I was lucky we lived quite close to a lot of bushland and would spend the afternoons looking for lizards, tadpoles and all kinds of animals with the neighbours. I also went to an agricultural school and was lucky to get to hand-raise animals like lambs and piglets.

KZ: Are you involved in any conservation programs?

T: The Asian Elephant is a Legacy species here at Taronga Zoo, meaning that we focus a lot on their conservation. The zoo funds a food farm for elephants in Sumatra who are doing it a bit tough, and we also help to fund a number of research projects helping to reduce conflict between humans and elephants over in Asia.

KZ: What is your favourite thing about your job?

T: My favourite thing is getting to work close to some of the most amazing animals in the world. Getting to introduce people to these animals and teach them about the animals is incredibly rewarding and really gives me hope for the future. 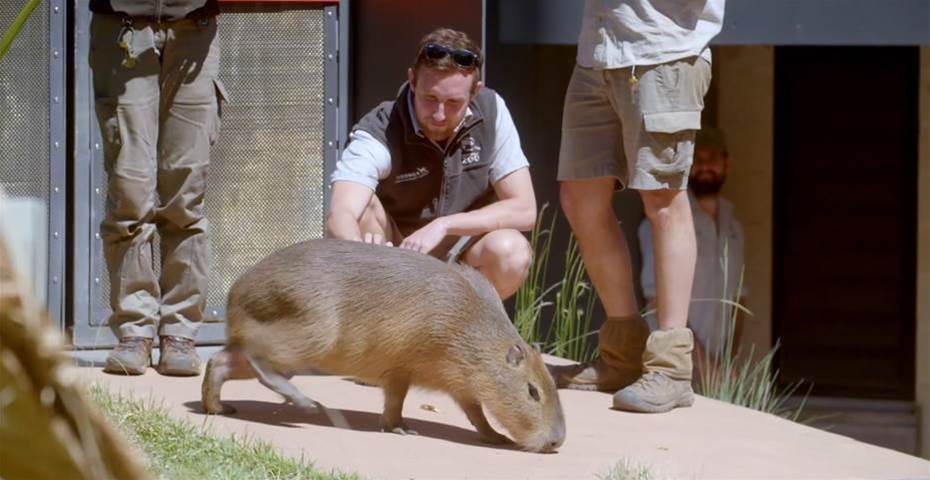 KZ: Which animal would be more fun to live with – elephants or capybaras?

T: Definitely a capybara! An elephant would be a little too destructive to live in your house. Capybara are incredibly affectionate and would probably cuddle up on the couch with you, go for a bit of an afternoon swim with you and would be a lot easier to clean up after!

KZ: What are three animal facts that K-Zoners would be surprised to know?

T: Elephants have one of the longest pregnancies in the animal kingdom at nearly 22 months!

Capybara are the largest rodent in the world, and although the boys can weigh nearly 40kg, the girls are even bigger and are bosses of the Capybara world!

An elephants trunk in a fusion of their nose and upper lip and has over 40,000 muscles in it! We only have 639 in our whole body!

Catch Taronga: Who’s Who in the Zoo on Saturdays at 7:00pm on Nine!

Want more of our interview with Tim? Grab the April 2020 issue of K-Zone, on sale now!