KZ: In real life, which of the five teens is most similar to you and why?

E: In real life, I would say I’m actually most similar to Taylor.  I can really identify with her passion and drive when it comes to the things she feels strongly about and that includes girls in sport.  We also look pretty similar.

KZ: If you and your friends started a YouTube channel, what would it be about?

E: My YouTube channel would definitely be about martial arts.  How much I love it, what it’s like competing, different styles and to motivate all girls to give it a go!

KZ: How would you describe your character, Taylor?

E: Taylor is very athletic, incredibly determined, and super enthusiastic about anything involving bikes!  She was a lot of fun to play, especially with her constant optimism and wacky ideas.

E: In the Mayor scenes, the voice of Beverly is actually our producer and director, Monica. My behind the scenes secret is that there is actually a team of people all there making you look good - and no normal teenager has perfect skin and perfect hair every day! Wardrobe, hair and make-up are stepping in between takes and touching us up and although I initially thought it would be hard to look normal again at the end of filming, it was actually a really nice feeling to wash your make-up off at the end of the day.

KZ: Do you have any hobbies or talents that would surprise K-Zoners?

E: I love martial arts and feel super passionately about everyone giving it a go. I think it’s especially good for young girls to feel strong in their bodies and be able to kick-butt! 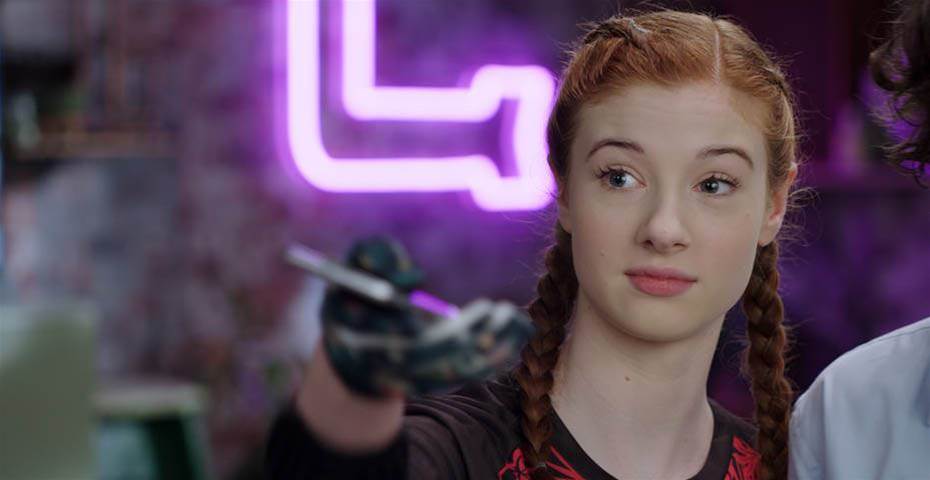 KZ: What was the funniest thing that happened on set? Was there a scene or line that made you or someone else laugh uncontrollably?

E: On the first day of filming, Madison got very excited in a scene and when she jumped onto the couch, it tipped over taking her with it.  The next time we had a fight scene during the Egyptian episode there’s a person out of sight holding it up and making sure it doesn’t flip over.

KZ: What was the hardest episode or scene to film? Why?

E: The fight scene with Melody because her headpiece kept falling off so whilst fighting each other, I had to hold it onto her head. We’re all friends in real life; Melody and I actually train together and do martial arts - we’re ready for a rematch! Madison then accidentally broke the headpiece when she was meant to fake smash it. The headpiece never stood a chance.

KZ: Were there any pranks pulled on set or behind the scenes?

E: We were pretty busy so there wasn’t a lot of time for pranks, however Madison, who plays George on the show, went around and put pegs in everyone’s dressing room.  She let me in on her secret, which is why I assumed she hadn’t put anything in my dressing room, but I didn't realise that’s because it was part of her proof when she told everyone else I did it!

KZ: What are your top three tips for K-Zoners who want to act?

My top three tips would be to have confidence in yourself because there can be a lot of rejection in acting and auditioning which is by no means a reflection of you and to trust that. Be super respectful to the crew as they're the ones that make you look good so don’t take them for granted. Remember, there are heaps of different ways to enjoy acting, it doesn’t have to be on TV. From doing a school play to making your own short films, it all counts.

Want to read more of our interview with El? Grab the January 2021 issue of K-Zone, on sale now!