thor and spiderman are cool - levi I love the pranks, they are soooo fun to do - Jack G I LUV KZONE IT IS DA BESSTTTT!!! #1 mag! - Thomas K-zone you have the best mags on earth👍👍👍👍 - Jasper N I love your prizes k-zone - Boston hey shout out to my friend Rowan the king of video games - rowan I Love K- Zone!! - Aarav I Love K-zone! XD - Jack G I love Afl and K-Zone - Matt My 3rd year getting kzone and it just keeps getting better - dylan b

Meet Bianca Hunt, the Yokayi Footy host who's as deadly on screen as she is on the footy field! Watch Yokayi Footy on Wednesdays at 8:00pm on NITV, or catch up on SBS On Demand!
Aideen Weingarth

KZ: Hi Bianca! What is your favourite thing about being host on Yokayi Footy?

B: Getting to yarn with all sorts of people! From AFL to AFLW players, to former players and legends of the game and also learning more and more about the great game of AFL through history!

KZ: What was your personal highlight while playing footy?

B: One season I got to play footy for the same club as my dad and brother.

KZ: Who do you support?

B: The Mighty Brisbane Lions!

KZ: Do you have any favourite items on the Yokayi Footy set?

B: There's a photo on the fireplace of my brother and I when we played under 10s footy together for the same team. My Dad was the coach and Mum was the manager! 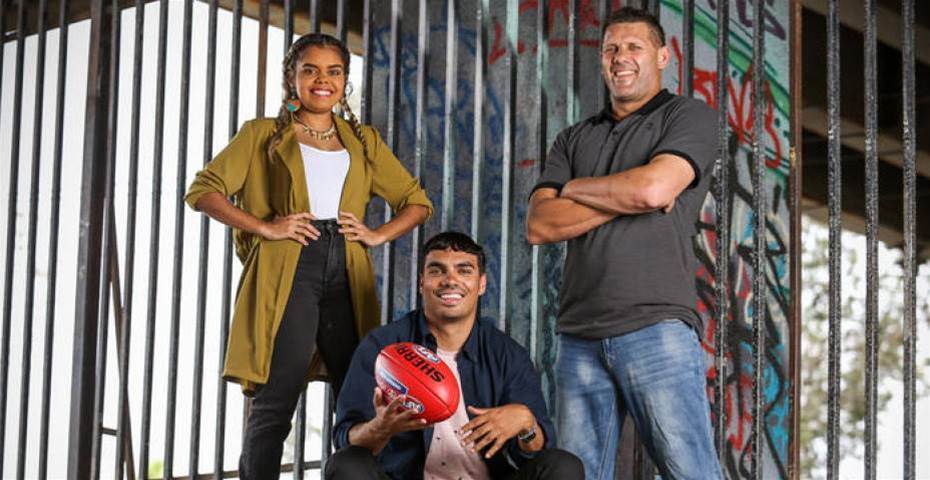 KZ: Which host is most likely to laugh uncontrollably while filming?

B: Definitely me! If you watch any one of the episodes, my laugh is probably the strongest!

KZ: Do you have any unusual skills that would surprise K-Zoners?

KZ: What is the funniest thing that has happened behind the scenes?

B: Probably the attempted TikTok that Josh Hill and I did. It took a few goes and my co-host Tony Armstrong (who isn’t a massive fan of TikTok) just shook his head and thought we were wasting time.

THE YOKAYI FOOTY HOST MOST LIKELY TO...

Trip on nothing: Tony! He’s got big feet and doesn’t look down.

Win at arm wrestling: Darryl. He’s got some solid arms, wouldn’t want to lose to him!

Make everyone laugh: Me, cause I’m the funny one!

Have a terrible memory: Tony! I reckon there’s a lot he doesn’t tell!

Have a room full of trophies: Darryl. He is a legend of the game, wouldn’t be surprised by his collection at all.

Want to read more of our interview with Bianca? Grab the July issue of K-Zone, on sale now!

Bianca is a great role model and has done so much in her life at such a young age and is truly inspirational as an Aboriginal women who is passionate about role modeling and striving for the best she can be! She is a great footy host and this footy show is awesome and much needed and refreshing show that appeals to people of all ages. This is only the tip of the iceberg and Bianca will reach for the stars in everything she she does! all best in future!

Which activity do you prefer in winter?